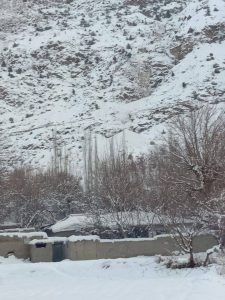 BONI: The residents of village Mandagh (Awi) in Upper Chitral have appealed MNA, MPAs, district administration and concern departments to relocate them in any safe place as their village is prone to avalanche.

A local social activist Afgan Raza, sharing details said that the residents of this village have been asked to shift to safer places as a precautionary measure against possible avalanches. The nearby mountain is packed with glaciers and fresh snow and could cause avalanches, especially when the weather starts becoming warmer. He said that alert was conveyed by an NGO working on disasters. He said the people are worried and spending sleepless nights.

He said the government should arrange a safer place for their stay as they have no alternative to move to and reside in.  If any untoward incident occurs, there is no arrangement for the locals, including women, children and elderly persons, to escape the area, he added.

February 24, 2018 By. Muhkamuddin Ayuni CHITRAL: A large number of people on Sunday took out a rally in Chitral town against India for threatening Pakistan of consequences in the wake of the suicide attack on its security forces in Pulwama, occupied Kashmir, on Feb 14. The participants of the rally, who were chanting ‘Death […]

February 08, 2019 ISLAMABAD: The federal government would pay a whopping Rs3.6 trillion on account of defence and debt servicing that is equal to 68.2% of the current fiscal year’s revised budget, the centre on Wednesday sensitised the provinces about the grave fiscal situation that has thrown the country into a debt trap. After excluding debt […]