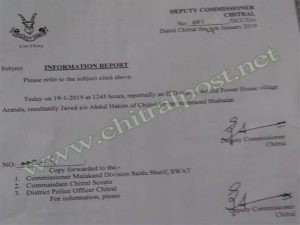 CHITRAL: An improvised explosive device (IED) went off in Arandu along the Afghan border killing a security personnel on Saturday.
Deputy Commissioner Chitral Khurshid Alam Mahsud confirmed the incident and identified the martyr as Javed Ahmed, son of Abdul Hakim, a sepoy of Chitral Levies. He was a resident of the Arandu village.
The DC said the IED device was planted underground near a Levies’ post at the old powerhouse village which exploded at about 12:45pm.

August 04, 2019 PESHAWAR: Provincial Senior Minister for Tourism Atif Khan Saturday said that they have already identified 11 new tourist sites and steps have been taken to provide facilities to the local and foreign tourists. He said this while talking to a delegation of the World Bank that called on him here. He said […]

By: Muhkamuddin CHITRAL: A Chines mine worker got injured on Monday while working in his project site. It is learned that Mr. Luronglai was working in a marble site in Shidi village near Gahiret. On Monday the Chinese national came under the blast of dynamite in the project site and got severely injured. He was […]

August 27, 2019 CHITRAL: People of Chapali at a meeting expressed their concerns over the delay in completion of a 250 kilowatt hydel powerhouse at Chumarkhan Gol. Work on the Chumarkhan hydro power project of Pakhtunkhwa Energy Development Organization (PEDO) had been launched by AKRSP in June 25 2015 and the project was scheduled to […]